The Biggest Brook Trout Ever Caught

Posted by Mansour Safdari at 20:54 No comments:

Rice and dried mushroom tastes awful even if it’s the only option on the menu for a lost cyclist in Mongolia. After forcing it down our throats, we had to double back on the same sandy road we had pedaled yesterday. On our way, we saw a local guy on a motorbike who drew on the sand the same thing: turn left after 20 km and then 15 km to Muste.

After 20 km, we found some tire tracks on the left supposedly toward Muste. There was no road sign or anything to indicate that the tracks would lead us to the town. We couldn’t afford to get lost again, so I stopped a passing truck and asked the driver if the tracks would take us to Muste. He wrote on the sand: 22 km. We followed the tracks—the only meandering signs we could depend on. The tracks turned into a dirt road later. It was heartening to finally see the town on our GPS getting closer and closer. Finally, we arrived there at 12 noon. It was a very ugly town, a group of sporadic houses. Surprisingly, there was a "hotel", a dilapidated building with no running water. The toilet was a shed outside the buidling with a hole in the ground. We decided to stay in the "hotel" as I wanted to rent a Jeep to Bulgan to get my iPad back—on one condition though: I had to pay for the cost of our stay as we didn’t have to stay in this ugly town.

We bought some water and groceries from a shop where I asked the owner if he would drive me to Bulgan and back. He asked for 400,000 Mongolian money, which is roughly about $200. After negotiation, he agreed on 300,000. I didn't deal with him. I went to another shop where there was a parked SUV. The guy didn't understand me so he drove me to a yurt where we met a lady who could speak some English. After a long negotiation, we agreed on 250,000 Mongolian money, but if I get my iPad back, I would pay 300,000.

Hopeful, we took off at 1 pm along with two other non-English speaking chatterboxes, one happened to be a police officer, as he claimed. During the ride, one of the guys asked me a lot of questions in very broken English. It was annoying to keep a conversation as I was tired and also worried if I could still get my iPad back after all this hassle.

Sitting comfortably in a 4-by-4 Mitsubishi, I was wondering: "what drives us through these impossible terrains. How can we find the energy and the motivation?"

Close to the Bulgan, we had a flat. The driver and the guys swapped the tire and we arrived in the town from dirt-road shortcuts. I walked into the hotel saying, “Hello, Hello”. As soon as the staff saw me, she repeated, “iPad, iPad”. Such nice people! After 4 days, I got my IPad back. Of course, it cost me $200.

On the way back, we had to wait for two hours to have the flat fixed; then, we went to pick up the two guys who had come with us from Muste, where we were invited in and fed. The house was kind of interesting; it did not have any furniture, but it had a cheesy, flashy stereo with a lot of lights, like the lights in a disco. There also was an artificial aquarium!

Finally at 7 pm, we started toward Muste and arrived there at 1:20 am. I had to wake up the woman working/living in the hotel to open the door for me. I went straight to bed not dreaming or thinking about how to get my iPad back. 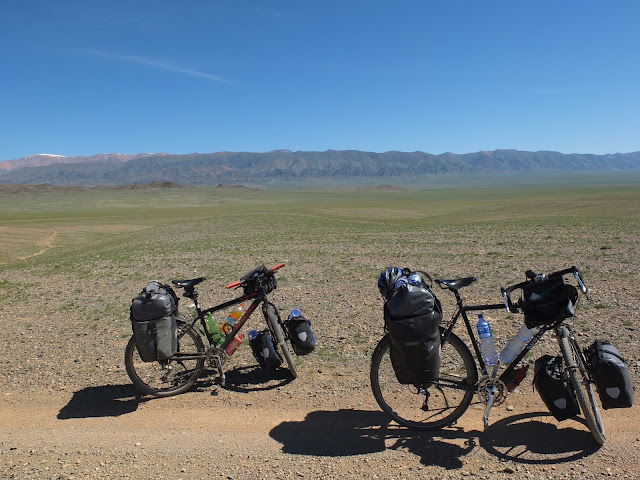 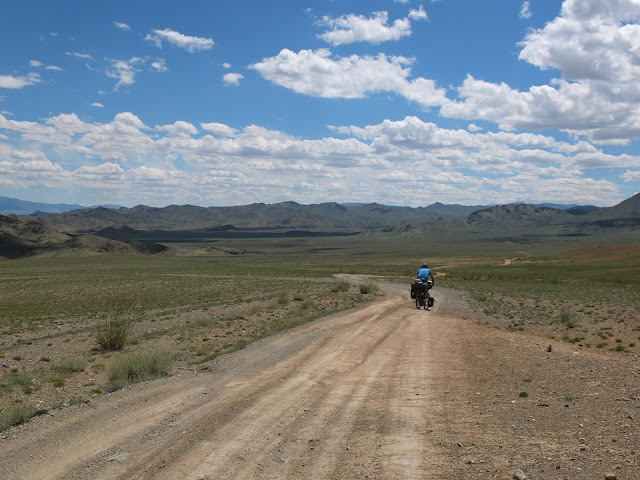 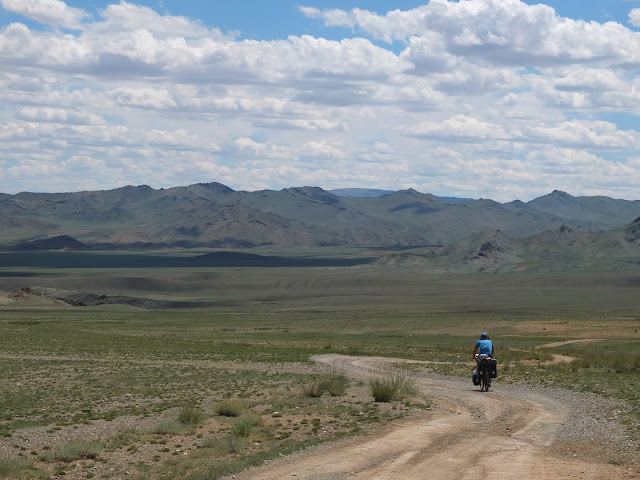 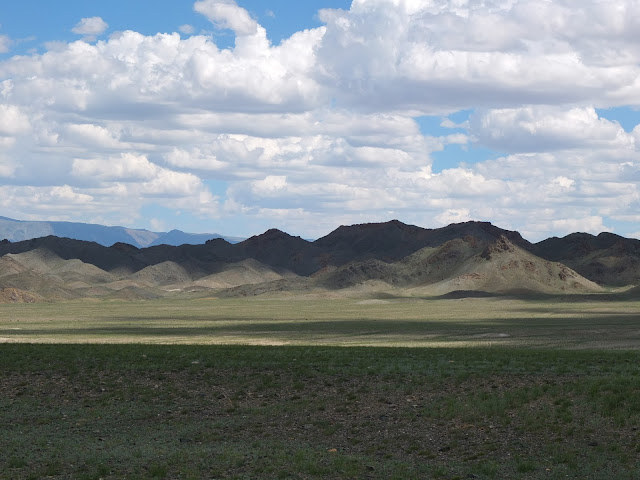 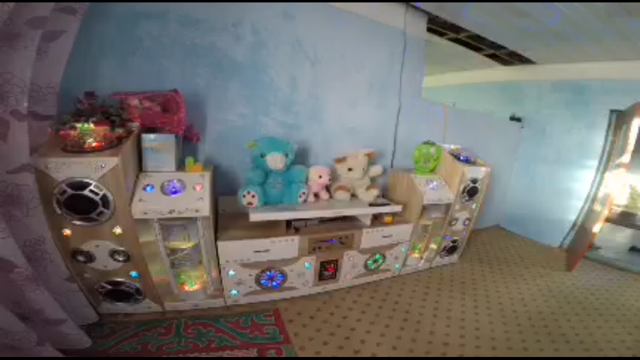 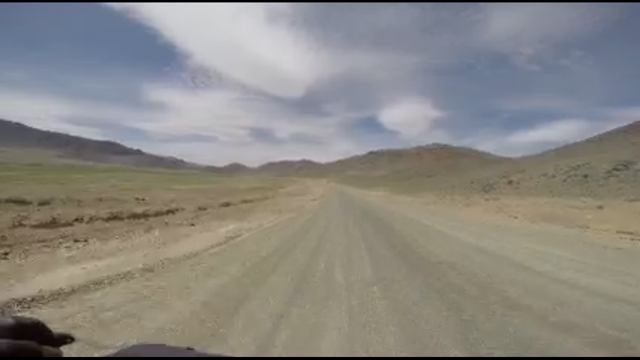 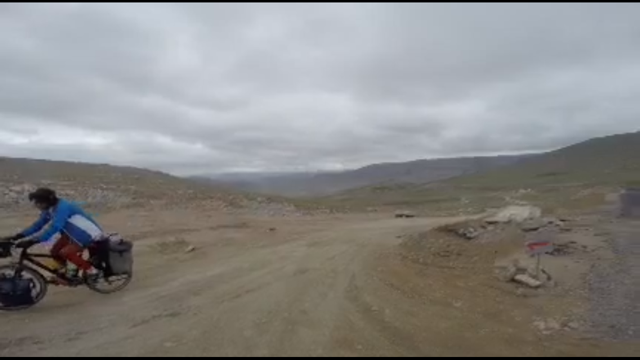 It rained all night. After having instant noodle and coffee in cold, we packed up and left the camp. I was shivering with cold and my hands were frozen. We had a 3000-meter pass ahead. Close to the pass, asphalt finished and we were riding on a dirt road.

The road was one of the worst I had ever ridden on. First, there was so much loose gravel and sand on the road that it was difficult to stay on the bike; second, some parts were so bumpy that we had no choice but to walk the bike; and worst, there were a lot of passing trucks cousing a lot of dust in the air. For every passing truck, we had to stop, close our eyes and hold our breath for a while. This was nonstop. Several times, we decided to bike off the road where we had to deal with very loose sand.

Early afternoon, there was a sudden shift in the weather to hail with very strong head wind. We took shelter in one of the tunnels under the road. It was so small that we had to crawl to get in. It took one hour for the bad weather to pass us, but the wind was still there.

Thinking that the town, Moste, should be very close, maybe 10 km, we kept riding-- fighting the wind and sand and looking for a sign of the town or a road that would take us there. After riding for 70 km, we saw a yurt, which happened to be the only vendor in the area. We asked for direction to Moste. She pointed toward the direction we were coming from and wrote on sand: "55" km! With further inquiry, we realized that we should go back 25 km to get to a side road which would take us to Moste. Disappointed, we looked for a spot to camp.

The idea of getting my iPad back was fading away.

Posted by Mansour Safdari at 12:57 No comments:


I woke up around 6, thinking about a way to get my iPad back. When I told Fausto about my idea of getting a Jeep and going to Bulgan to get my iPad back, he said that it was possible, but he thought we would not be able to find each other later if we departed . He thought I should have gone to the town at 6 o'clock while he waited for me. Reluctantly, I decided to forget about my iPad and enjoy the trip. It was a tough decision to ride farther from my iPad—only 100 km....

After 10 minutes of riding, we saw two guys standing next to their broken motor bike with a flat tube. Fausto managed to patch two big holes in the tube. They wanted to pay him for that, but he smiled and gave them some extra patches.

Three hours later, when we were having coffee and biscuit by a river on a break, Fausto thought I could still get a Jeep to Bulgan in the next town 80 km farther. If I did, the distance to Bulgan and back would be 180 km. With this hope, I kept riding stronger for 60 km as a long part of today’s route was asphalt by a river. We kept going up and up on the mountains until the river turned into a small creek, where there was supposed to be a town. But instead of a town, we saw a couple of houses some 500 meters off the road. I searched the area for a car, but I didn’t see any. We checked a yurt which was supposedly a shop and bought some groceries and water. I asked if there was a jeep in the town. They gestured “horse”. We camped very close to the "town" and did the usual to prepare for a cold night close to 3000 m. 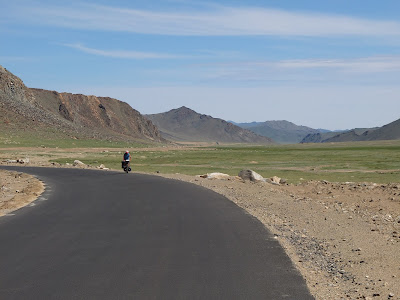 Posted by Mansour Safdari at 15:01 No comments: